A New Leader Emerges From The Church Of Big Software. Are We Worthy? 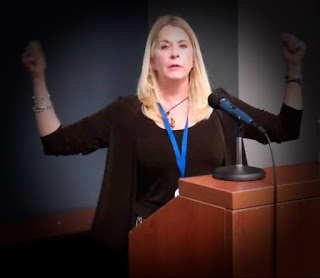 
It has been a while since a new church was formed and a leader has emerged, but, ladies and gentlemen, we are witnessing it right now.  It has it all - a grand palace, lots of rules one dare not break, and, most importantly, a spokesperson with a lot of shame to hand out to those who dare challenge the doctrine.  For those of you considering selling your soul elsewhere, I strongly urge you to consider The Church of Big Software...since it does come with some cool swag.

Let me back up for a minute.  I am trying to tell a story here.  Let's go back a few centuries and consider the days before scientists were permitted to study human anatomy, and before scientists accepted that infections were caused by microorganisms...and not evil spirits entering open wounds and exposed cavities in the human body.  Let's go back to a time when religious figures had the final say about what constituted useful knowledge...and what was a wicked attempt to subvert the teachings of the church.

What some of you may not know is that, prior to being granted permission to study with a prominent physician in Italy, Leonardo was guilty of a crime every time he opened a corpse and decided to study it.  Religious figures of the time strictly forbade such activities, unless one was a physician (which, by the way, was considered someone working with the hands of God).

Being that this is a blog post, I want to fast forward to the work of Ignaz Semmelweis, who many believe to be the father of modern germ theory.  It was Semmelweis who first theorized that the reason people got ill and often died after being operated on was because microorganisms entered the body and wreaked havoc.  He proposed that if doctors washed their hands it would prevent such occurences.  Semmelweis was essentially pronounced a lunatic and his work was soundly rejected.  How can anyone claim that anyone working with the hands of God and of such high social status be unclean?  After all, the medical profession was there to provide healing to those in need.  How dare anyone try to solve a problem they (and the religious community) have not themselves solved?

Thankfully, we know better today.  Doctors wash their hands.  Most people wash their hands, and some basic hygiene has led to a lot less death.  Thankfully humanity does eventually move on from their beliefs and consider that maybe, just maybe, those who point out some flaws in a process may be onto something useful.

Not for Mary Ann Davidson and her Church of Big Software, however.  Apparently she has decided that anyone who is researching security vulnerabilities in Oracle software is guilty of violating church doctrine (which she refers to as a licensing agreement), and must cease and desist or face some sort of punishment (which she suggests in a cleverly veiled way).  If you don't believe me, please read this post found on the Internet Archive Way Back Machine, which Oracle quickly removed from their security blog because, I am assuming, they are not quite ready to construct a cathedral to honor the mighty and powerful Mary Ann Davidson.

After all, there is not enough stained glass in the world for that church...
Posted by Mike Ahmadi at 11:02 AM